There were 2 “must see” attractions for us in Springfield, Missouri. The first was the original Bass Pro Shops which is as large as 7 football fields and takes up an entire city block. In addition to all of the sporting goods for sale, inside this Bass Pro are waterfalls, aquariums, exhibits, a restaurant, and 2 museums – the Archery Hall of Fame and the NRA National Sporting Arms Museum.

This guy was huge

Our second stop was dinner was at Lambert’s Cafe – the Home of Throwed Rolls. Lambert’s has been featured on TV shows and yes, they really do throw the rolls to you! The roll thrower was a young man who would stand at one end of the restaurant and announce “Hot rolls!”. When someone holds up his hands, he tosses them a hot roll. He told us a lot of people miss the catch.

When one little boy asked him “Why do you throw the rolls?” he answered “I don’t really know.”

The rolls were warm and yeasty and delicious. We both had a pork special with barbeque ribs, pulled pork and pork tenderloin served with cole slaw and a sweet BBQ sauce. Servers walk through the restaurant with large stainless steel bowls of pass alongs to offer to each table. We tried them all – black eyed peas, fried okra, fried potatoes, and macaroni and tomatoes. We had so much food we brought enough home for a second meal! 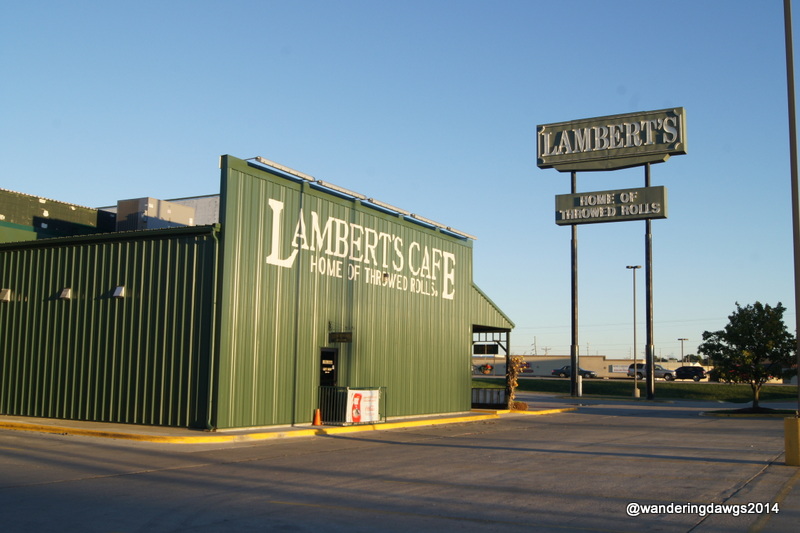 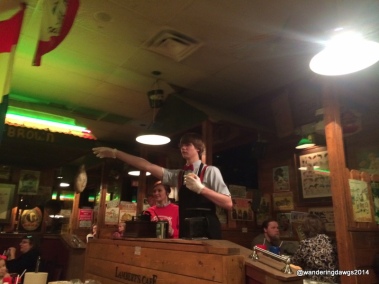 Throwing the rolls at Lambert’s Cafe