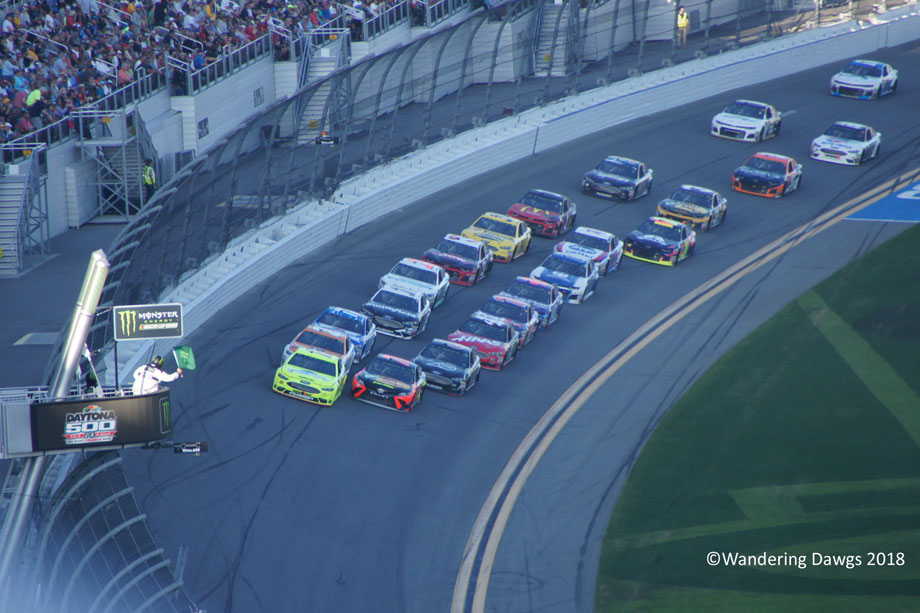 Henry and I have only been following NASCAR for two years. Ever since the first time we watched the Daytona 500 on TV in 2016 I knew I wanted to go. So this year we went. And it was even more fun than I thought it would be.

NASCAR stands for the National Association for Stock Car Auto Racing. The biggest race of the year is at the beginning of the NASCAR season. Every February, the Daytona Speedweeks is held at the Daytona International Speedway. The Daytona 500 – the Great American Race- ends a fun filled week of entertainment on the midway and qualifying races for the Daytona 500 as well as two other NASCAR races.

We arrived in Daytona on Thursday afternoon. During the next few days we went to three races, drove along A1A on the way to lunch at Racing’s North Turn restaurant in Ponce Inlet, had lunch at Caribbean Jack’s on the Intercoastal waterway, watched the Thunderbirds practice, and didn’t have time to catch our breath until Monday morning. 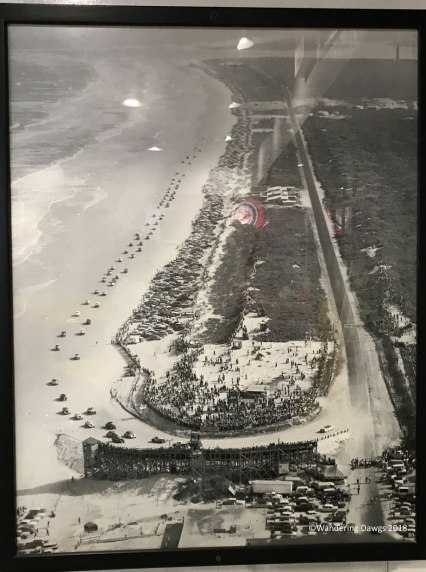 Old photo from when the race was held on the beach 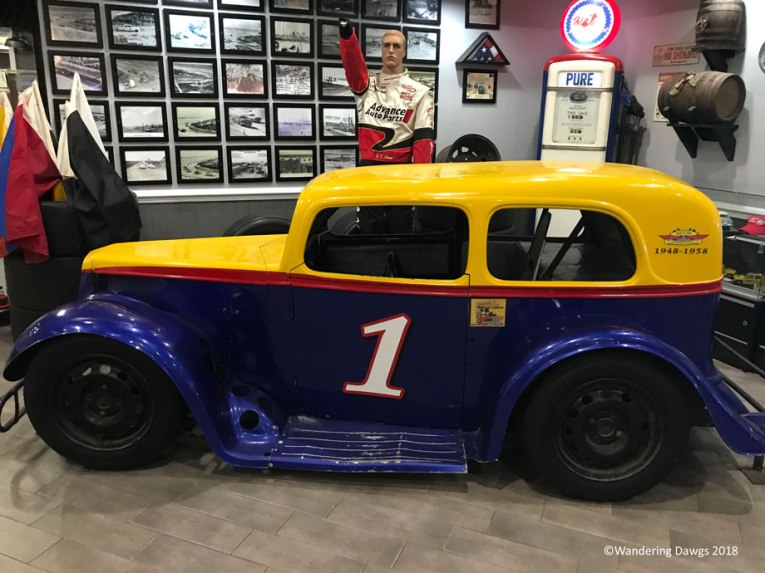 Our first NASCAR race was the Can-Am Duel on Thursday night. Here’s a short video to give you an idea of how fast these cars are going and how loud they are.

Our second race was Camping World Truck Series race on Friday night. We arrived at the track early so we could wander around the midway to see some of the exhibits and do a little shopping. We entered the grandstands with plenty of time to walk around for different views of the track.

The trucks were fast and loud and the race was exciting. A great way to spend a Friday night!

After two night races in a row, we decided to take it easy and skip the Saturday Xfinity series race. Instead, we watched the United States Air Force Thunderbirds practice in the morning before enjoying lunch at Caribbean Jack’s on the Intercoastal Waterway. 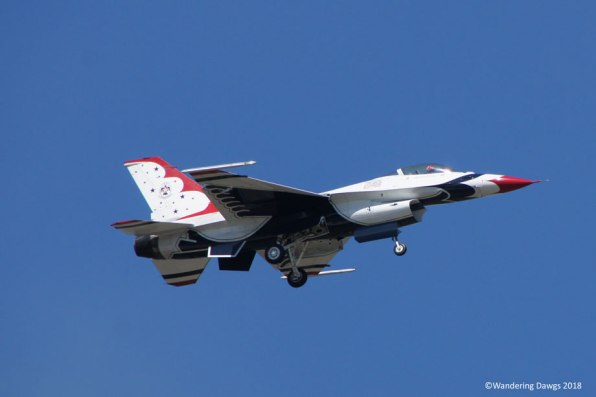 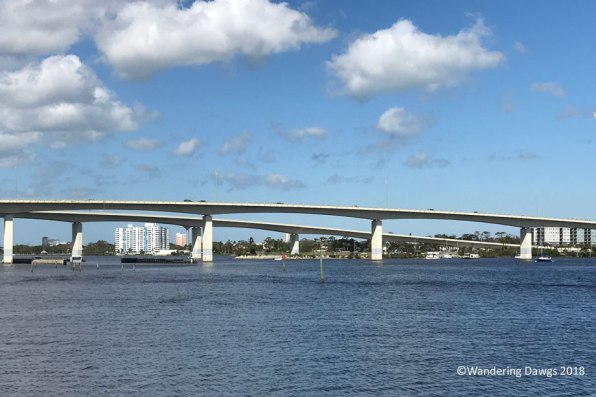 Beautiful day for lunch on the deck overlooking the Intercoastal waterway

Sunday was the day of the 60th Daytona 500 and a long day at the track for us. We had tickets for the Fanzone so we arrived in the morning to have plenty of time to go out in the middle of the track and get up close to the pit area, see the cars, and enjoy some of  the pre-race festivities.

We had a great view of the whole track from our seats in the upper section. After a concert by Rascal Flatts and the driver introductions, each driver rode around the track in a pickup truck. 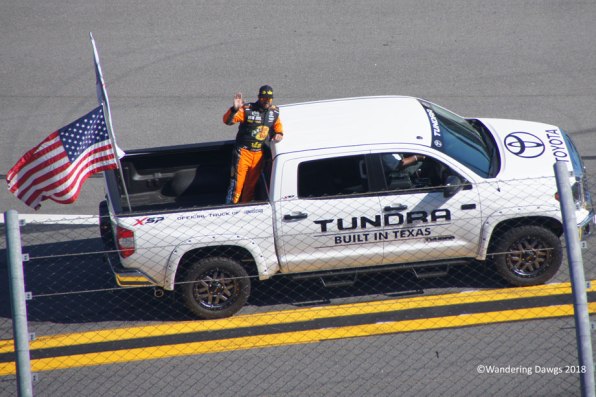 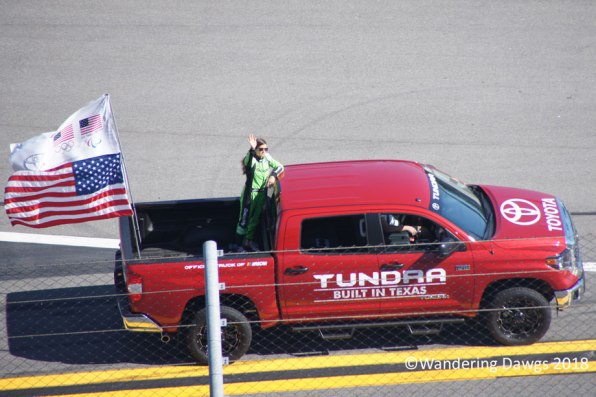 After the national anthem, the USAF Thunderbirds performed a flyover.

The race was exciting with the lead changing several times. A huge wreck near the end of the race knocked out all of the leaders and #3 Austin Dillon was the winner.

Watching a race on tv is fun, but nothing compares to seeing it in person. I was fascinated seeing all the things that go on before the race, at how well organized and perfectly timed everything was. The sight and sound of the cars going by at almost 200 miles per hour is mind boggling. Most fans have a favorite driver and it was fun seeing them all decked out in their favorite driver’s gear.

In case you are wondering, our favorite driver is #78 Martin Truex, Jr. He was in second place until the last wreck but he did finish the race.

I’ve already made reservations at the RV park for next year!

11 thoughts on “Daytona Speedweeks and the Great American Race” 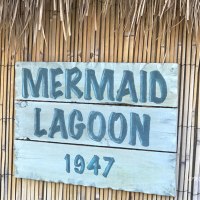 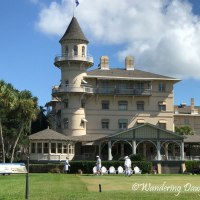 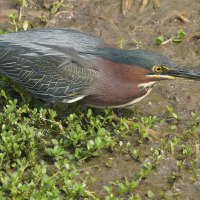 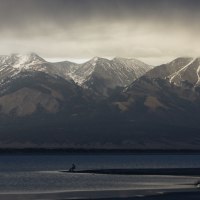